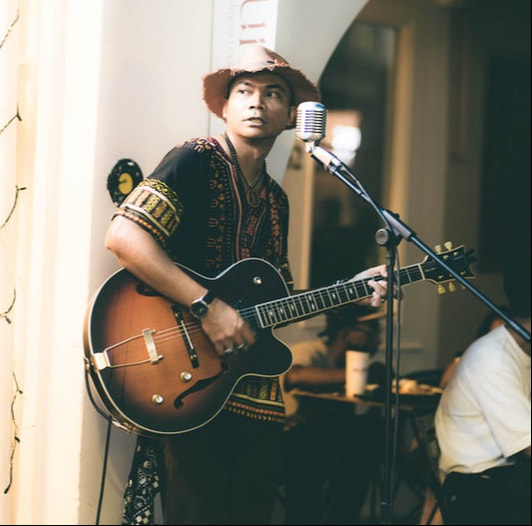 Peace, Love and Archtop Guitars
​That's the mental picture when you think of Mellow Blues.
Inspired by Bob Dylan and Jimi Hendrix, Mellow Blues is an Indie Rock & Blues guitarist and singer-songwriter from Singapore. With his unique blend of tropical island vibes, laid-back grooves and blues based guitars, Mellow Blues' musical style incorporates elements of indie, psychedelic, rock, folk, reggae, and blues and sounds like Jake Bugg and Gary Clark Jr freshly brewed into a cup of coffee. ​Endorsed by Emiya Guitars, he has collaborated with them to design his very own “Mellow Blues” archtop guitar series.

Mellow Blues had performed in various venues in the UK, Vietnam, Thailand and Singapore. No matter where he plays, something remains the same: Cool people hanging out with their partners in crime, singing along and grooving to his music. Altogether in the spirit of peace, love and good times!

Mellow Blues had released an album, a handful of singles and EPs on all streaming platforms. His most streamed song on Spotify is Gypsy Rock Anthem, which is currently reaching 18,000 streams. Not a bad number considering he is a full on independent artist. Physical copies of Mellow Blues' debut album is sold out. Even Mellow Blues himself doesn't have a copy of that album. Mellow Blues hopes to continue making music, touring and inspire others through his sound until his last breath. ​